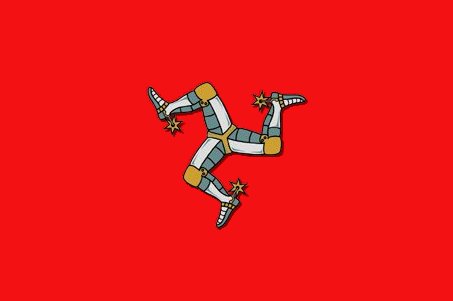 The Isle of Man is a British Crown Dependency formed by a main island and some islets, located in the Irish Sea, between Ireland and Great Britain. The sovereign is the British monarch, as Lord of Man, who is represented by the governor-general. Its international representation and defense are the responsibility of the Government of the United Kingdom.

As a member of the Common Travel Area, the free movement of citizens of the European Economic Area is also permitted.

The island is 572 sq. km. in size and has a low elevation above sea level, with 621 meters being it maximum altitude, found on Snaefell mountain. Around the main island, there are a few smaller islands such as Calf of Man, St Patrick and St Michael.

The English language is spoken by almost the entire population of the island and is also the official language. Manx Gaelic is the historical language and was traditionally spoken, but today there are few who speak it fluently or on a daily basis.

The Isle of Man Pound is the official currency; it is not an independent monetary unit, but is a special pound sterling (GBP) issued for the island.

The Isle of Man has a completely independent government, parliament elected by universal suffrage (Tynwald) and judicial system. The executive power of the island is in charge of the General Minister and his or her Council of Ministers. The General Minister is nominated by Tynwald after each general election.

Financial services are its main economic sector. Banking, insurance, financial and offshore business services alone constitute more than a third of the island's GDP. An office of the International Stock Exchange was recently opened to boost the financial industry of the island.

Manufacturing, tourism and more recently gambling are other key sectors of its economy. Agriculture and fisheries, traditionally the major sectors, are currently relatively small in the Manx economy.

Below, you can find why and how to set up a company and do business in the Isle of Man, banking and investment options, and how to get residency and eventually citizenship in this Irish Sea territory.