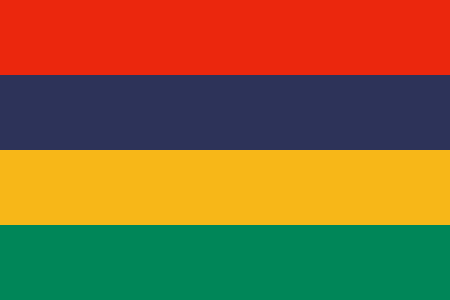 The Republic of Mauritius is a sovereign island country located in the southwest of the Indian Ocean, about 900 km from Toamasina, a town on the easternmost coast of Madagascar, and approximately 3800 km southwest of Cape Comorin on the southern tip of India.

In addition to the island of Mauritius, the republic includes the islands St. Brandon, Rodrigues and the Agalega Islands. Mauritius forms part of the Mascarene Islands, along with the French island of Reunion, which is about 170 km to the southwest.

Mauritius is inhabited by about 1.4 million people. Its capital and most populated locality is Port Louis.

The people of Mauritius are multiethnic, multi-religious, multicultural and multilingual. Mauritian Creole, French, English and Bhojpuri are its vernacular languages, plus another 9 that are spoken in the territory.

Its official currency is the Mauritian rupee (MUR).

Mauritius is ranked highly for its democracy and economic and political freedom.

The Head of State of Mauritius is the President, who is elected for a period of five years by the National Assembly, the Mauritian unicameral parliament.

The National Assembly has 62 members elected by direct and popular suffrage and includes between 4 and 8 members representing ethnic minorities, depending on the election results. The government is headed by the prime minister and a council of ministers.

Since its independence from the British in 1968, Mauritius has seen a dazzling evolution.

The island went from being a low-income country with low per capita income, in which the economy was based on agriculture, to a country that now enjoys the status of an emerging and constantly developing nation with middle-level incomes and a diversified economy based on growing industrial, financial, service and tourism sectors.

During these last 5 decades of economic growth, the Mauritius has grown at a rate of around 5% to 6% per year. This result translates into a significant improvement in the quality of life and a significant increase in life expectancy, a decline in infant mortality and an impressive infrastructural development.

Regarding the primary sector, sugar cane accounts for 90% of crops and accounts for 25% of its exports. Livestock in Mauritius mainly consists of pigs and goats, and fishing is also an important source of income.

Its main industrial sectors are textiles, information and communications technology, and seafood processing, as well as petrochemical and chemical industry in Port Louis.

Tourism is its most prominent sector and a significant source of its foreign exchange revenues. Mauritius is a growing tourism destination for its natural beauty and man-made attractions, the multi-ethnic and cultural diversity of its population, tropical climate, beautiful beaches and water sports. The issuance of stamps for collection is also a source of income.

The financial sector is a major economic pillar of the Mauritian economy, with more than 10,000 offshore companies incorporated and a broad offer of banking, insurance and reinsurance services, captive insurance managers, trading companies, ship owners or managers, fund managers and international corporation services.

If you want to set up a company, open a bank account, immigrate and/or obtain residency permits in Mauritius, you can view some of the articles and more information about the country below, or get in contact with us directly for a free private consultation.