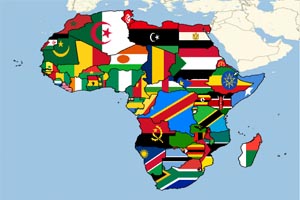 Africa is the world's second-largest continent, and with roughly 1.2 billion people, is also its second-most-populous. Africa is home to a myriad of different ecosystems and cultures, and is considerably rich in natural resources such as diamonds, salt, gold, iron, cobalt, uranium, copper, bauxite, silver, petroleum, cocoa beans, woods and tropical fruits.

Africa may be the poorest continent in the world, but it is currently also the fastest-growing. A range of factors have contributed to this boom, including strong demand for its raw materials by emerging countries, a demographic boom, an emerging middle class and the strengthening of its domestic markets, and an increase of foreign investment.

Besides its second-largest and most developed economy, South Africa, countries such as Nigeria (which with 200 million people and a GDP of $376bn in 2019 has Africa's largest population and economy), Ghana, Algeria, Morocco, Kenya, Tanzania, Rwanda and Zambia, among others, are leading the continent's growth.

Although many parts of the continent suffer from a lack of infrastructure, and in some countries relatively unfriendly business environments, it remains full of investment opportunities. The massive increase in Chinese investment and involvement with the continent over the last two decades is testament to that.

At Flag Theory we help you find the best strategic locations globally to improve your privacy, freedom and wealth. If you are looking for investment opportunities, or want to set up a company, open a bank account, immigrate and obtain residency permits, or even a second citizenship in Africa, check our articles about the continent below.