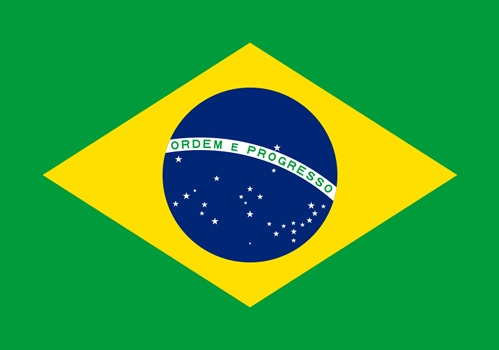 Brazil, officially the Federative Republic of Brazil, is located in the eastern half of South America. It borders the French overseas department of French Guiana, Suriname, Guyana and Venezuela to the north; Colombia to the northwest; to the west with Peru and Bolivia; to the southeast with Paraguay and Argentina, and to the south with Uruguay.

It covers a size of 8.2 million square kilometers and has a population of more than 200 million inhabitants, making it the largest and most populous country in Latin America, and the fifth largest worldwide. Its capital is Brasilia, although its most populated city is Sao Paulo. Its official currency is the Brazilian Real (BRL).

The Brazilian economy is also the largest in Latin America, the sixth largest in the world by nominal GDP and the seventh largest by purchasing power parity. The country is a founding member of the United Nations, G20, the Southern Common Market of the South (Mercosur) and the Union of South American Nations (Unasur), besides being one of the BRIC countries.

The country has several large and developed economic sectors such as agriculture, mining, manufacturing and services, as well as a large labor market. Brazil is a top exporter of aircraft, electronic equipment, automobiles, alcohol, textiles, footwear, iron, steel, coffee, orange juice, soybeans and corned beef. In addition to being a world power in agriculture and natural resources, it has abundant reserves of oil, coal, gas, timber, gold, diamonds, rubies, emeralds and many others.

At Flag Theory, we’re here to help you during every step of your internationalization and structuring plans. If you want to set up a company, open a bank account, immigrate and/or obtain residency permits in Brazil, you can view some of the articles and more information about the country below, or get in contact with us directly for a free private consultation.