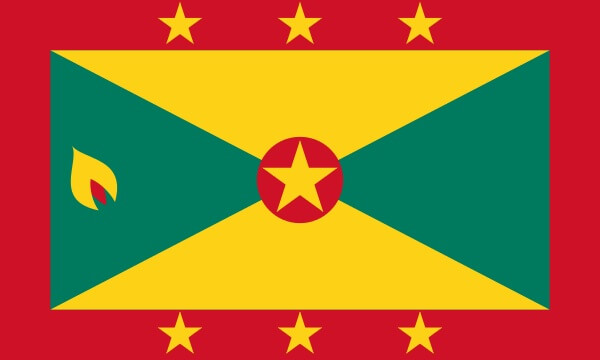 Grenada is a Caribbean country, and member of the CARICOM and the Commonwealth. It is located in the Lesser Antilles, in the southeastern Caribbean Sea, north of Trinidad and Tobago, northeast of Venezuela, and south of Saint Vincent and the Grenadines. It consists of the main island (Grenada) and a series of small islands, called the southern Grenadines.

With just 344 sq. km of land and a population of 109,000 inhabitants, it is the second smallest independent country in the Western Hemisphere (after Saint Kitts and Nevis). Its capital is Saint George. The official language is English, which is the one used by the Government, although its people speak an English Creole language, known as Grenadian Creole, which is a lingua franca. Its official currency is the Eastern Caribbean Dollar (XCD), pegged to the US dollar at a 2.71:1 ratio.

Its economy is mainly based on offshore financial services, tourism and agriculture. Regarding agriculture, Grenada is the world's second largest producer of nutmeg after Indonesia. Other exports include maize spices, cocoa, citrus, bananas, cloves and cinnamon. It also has a small manufacturing sector, processing other foods and producing beverages, textiles and assembly of electronic components for export.

The International Companies Act allows for the formation of International Business Companies, which are entitled to do business outside the country and are fully tax exempt. In addition, International Companies benefit from almost non-existent accounting requirements and maximum confidentiality. Another popular offshore service in Grenada is the offshore trust, a vehicle for property protection and pension funds. Offshore banks in Grenada also offer a wide range of banking services.

Grenada also has a citizenship by investment program, where it is possible become a Grenadian through a US$200,000 donation or a $350,000 real estate investment plus fees.

If you want to set up a company, open a bank account, immigrate and/or obtain residency permits in Grenada, you can view some of the articles and more information about the country below, or get in contact with us directly for a free private consultation.