Since we started writing about the topic of ICO’s we’ve been inundated with interesting projects hoping to do an initial token offering.

It seems like if I go to a conference, there are multiple panels on the topic (as there was last weekend at TechSauce in Bangkok). If I look at my phone, multiple group chats are going on about the benefits and potential perils. I am waiting for the day when I see an ICO billboard driving down the street.

However, the regulators are starting to take notice as well.

This last week we had a piece of news from the SEC, who released an investigative report about the DAO – which they declared was a security, but at this point, they were taking no action.

The takeaway I got from this report was that some tokens are securities, and others are not. This is something we really already knew before, but it’s helpful to hear a regulator clarify on this point.

An ICO has definite risks for both investors and proprietors. Investors need to evaluate if the token has any intrinsic use case they are interested in (if it’s a ‘for use’ token). And if it’s a security token, investors need to assess whether it will appreciate in value.

I also came across this very nice spreadsheet to help entrepreneurs evaluate whether their token may be considered a security, or not. In particular, this helps evaluate the token against the “Howey Test” which is the test used at the federal level in the US to evaluate a security.

I manipulated the numbers a little (since this is an interpretation of laws and by no means, legal advice or the laws themselves). I also added a section to include risk capital test – the test applied in some states including California.

In other news, we also heard from the Singaporean regulator MAS on token sales. Previously, on March 13th, 2014, the regulator wrote that virtual currencies were not regulated per se, and they are not securities 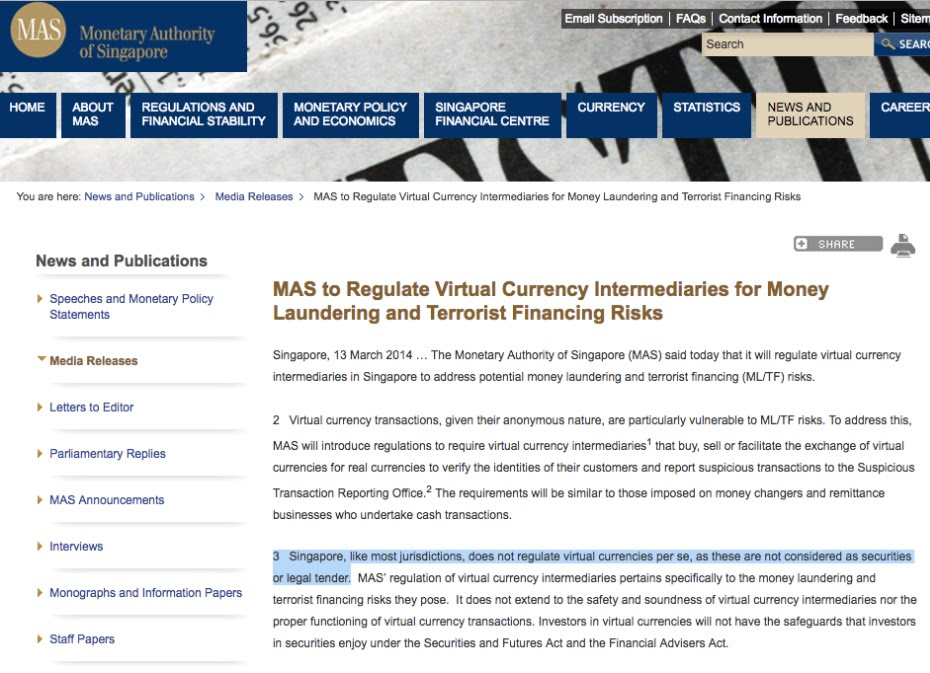 Now, from 2014 the position was very clear – tokens are not securities. Today’s memo states that tokens may be considered securities, depending on the individual circumstances. Now, this doesn’t officially change anything (a token could have been a security before) but clarifies and specifies the point that tokens may at times, fall under securities regulation – basically the same as the SEC ruling.

Here is the report from MAS in its entirety.